IN THE LABYRINTH – One Trail To Heaven
2011 (CD Trail Records)
www.inthelabyrinth.com 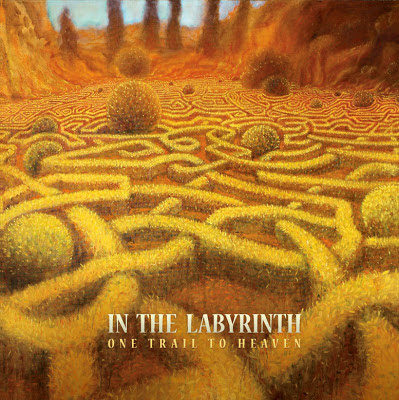 For sure this is one splendid appetizer. It will definitely make you wanna search, find and buy all the other “works” of this Swedish progressive psychedelic band. It’s like a ‘Best Of’ including songs from their 3 CDs so far (1994’s The Garden Of Mysteries, 1999’s Walking On Clouds and 2002’s Dryad) plus some unreleased original material including a Moody Blues cover (“Cities”). One hour of fine-old-sweet-progressive-folk-eastern influenced-psychedelic instrumental (mostly) music. Mastermind of the band is multi-instrumentalist Peter Lindhal who plays a serious amount of instruments in order to achieve his purposes. Mellotron, viola,guitar, bass, saz, zither, mandolin, baroque travers-flute, quena, synths, piano, melodeon, darbouka, daf to name a few… It’s hard to pick favorites. He deals with so many branches of well-played progressive music. Like a huge Labyrinth with numerous corridors. Each corridor, a different musical inspiration, a separate musical approach. The whole album is overwhelmed by a continuous flow of musical sounds and timeless tales that were put in the right order by the right person. Peter, a modern Thiseas, opened a trail to Heaven, in which, All of Us are Free to follow! TimeLord Michalis

Email ThisBlogThis!Share to TwitterShare to FacebookShare to Pinterest
labels In the Labyrinth, Trail Records