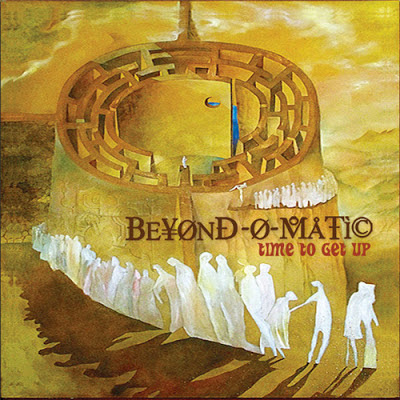 I’d like to thank Alexander from Trail Records who kindly sent me a few of their releases for reviewing. Alexander put me on an underground ‘trip’ and I suggest all of you follow the steps I made. Well, Beyond-o-matic was a band (hailed from San Francisco) who released 3 albums back in the 90s. They reformed in 2003 and recorded an album that was never released till 2010. “Time To Get Up” consists of 7 tracks moving into 70s psychedelic space rock using sounds from instruments like Croos5 bariguitar, long stiff finger of doom, synthesizers, table, accordion, flute creating a unique ambient idiosyncratic  atmosphere. “Plague Of Bliss” (6:12min) opens the album, a slow spacey number combining heavenly inspirational vocals and harmonies. “Hawaiian Lady” (the longest track, 14:18min) is a magical epic anthem with wah-wah guitars, spacey synth effects becoming really progressively trippy at times with a groovy funky feeling. “Starbong” welcomes Early 70s Floyd, mid 70s Gong and Hawkwind, a psychedelic cosmic tune infused with various effects and a flute coming straight from the Canterbury scene. “Trying To Find You” (12:09min) is a far-out space-rocker, a mind-expanding psychedelic space trip. The self titled “Time To Get Up” (11:09min) follows. A floating-around-the-stars kosmique piece of stardust! “The Liquid Midnight” (1:16min) acts like a vocal interlude (an intermission - I don’t really know from what) and album closes with “Child Of Fog”, a space-pop number reminding of late 70s Floyd. A Space Journey worth tripping to! TimeLord Michalis

get it from here: .trailrecords.net