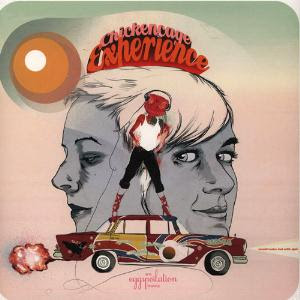 Polytoxicomane Philharmonie are by now established in the underground as one of the most weird musical units of neo-prog-avant garde-psychedelic music! This is a side project created by singer H.M. Fishli (vocals, percussion, nose flute) along with Austrian singer Michaela Flame (vocals, keyboards) with the help of Emir Of Quaver on drums, Wum on guitar and Onkel on bass. This album is going to agitate the stagnant water of the whole Underground Universe! No more talking… Album takes off with “The Eternal End” (9:31), a fast tune with an explosive acid guitar sound while the complexity of the sounds makes it a psychedelic funky acid dub track! “Lascivious Dungeon Tales” (9:57) plays with hyperspace in a psych scary-like atmosphere, vocals are coming from Hades in a ambient-like dirge becoming a psychedelic New Age prayer, it’s like you hear Dead Can Dance on Acid! In a psych vein with whispering vocals and trippy guitar starts the “Novelette Of Bitter And Sweet” (17:15)… Life’s A Journey… this is an interesting experiment of sounds and voices from the depths of the mind in a delirium of verses and poetry. The same psych vein with weird sounds dressed by female vocals continues in “Death Watch Beetle Goes To St. Brownie” (4:55) but in a more mystical way. “The Owl, The Bell And The Club Of Veterans On The Top Of St. Brownie” (22:36) starts in a spacey groovy psych way becoming weirdly ‘out-of-space’ acting like a psych mantra for the soul, really mind-expanding with a melancholy organ sound while guitars are getting heavier, it seems that the singer is having an out-of-body experience in a psychedelic vein! Another dominated-by-singer’s-voice track is “Ride Ridden Shine” (11:56) that starts like a psych improvisational experiment in an eerie jazzy atmosphere. Last one is “Homesick Tours” (10:23), a trippy psychedelic slow-driven dreamy relaxing tune with a few effected sounds. Think I’m inside Alan’s Psychedelic Breakfast… Think I’m going to break a few eggs and make a psychedelic omelet too… TimeLord Michalis

posted by timelordmichalis στις 10:18 AM