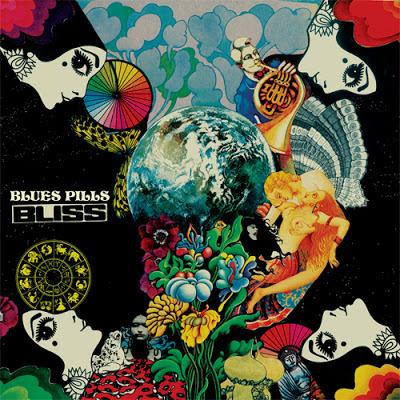 Bliss” is the 4-track debut EP by this international quintet consisting of 2 Americans, 2 Swedish and 1 French. The band got together in September 2011 when Cory Berry (drummer who has now switched to guitar) and Zack Anderson (bass) wanted to form their own band (both former members of Radio Moscow). They joined forces with lead singer Elin Larsson, drummer Jonas Askerlund and guitarist Dorian Sorriaux. The music here is Heavy, psychedelically influenced with lots of Blues references. Hot guitar licks, sharp bass lines, powerful drumming and really harrowing female vocals. Despite their short ‘existence’ the music is so professionally tight, full of energy and freshness all over the EP. Band introduces themselves with “Bliss”, a killer number that has ups and downs singed in the charming singer’s mother language! “Astralplane” is more bluesy but heavy too, a slow poisonous torturing number. Side B opens with “Devil Man” and comparisons to Elin’s voice with Ellen McIlwaine or Janis are inevitable and welcomed. A real strong tune with lots of heavy guitars and a dynamic rhythm section. EP closes with the melancholic 70s influenced ballad “Little Sun”. I’m only wishing this not be circumstantial ‘cause I’d like to have a full album of them in the near future… A Pill so hot that it burns…  TimeLord Michalis

Go Get it Here: crusher records

posted by timelordmichalis στις 9:46 AM