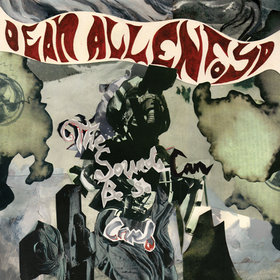 Dean Allen Foyd was/is an imaginary Bluesman trying his best to redefine 20th century Blues… His name gave birth to a bunch of Scandinavian (Stockholm) youngsters and his visionary music haunted those freaksters, leading them to a remarkable result entitled “The Sounds Can Be So Cruel”, which by the way is their debut album, recorded back in February 2010 at Fashionpolice Studio Stockholm and finally released through Crusher Records March 2012. So, this psychedelic Swedish trio (Francis Rencoret – vocals & guitar, Fredrik Cronsten – bass and Wille Alin – drums) releases one of the Best Debut albums of the last 10 or so years! But they will not have made it without the precious help of the holy triad Syd Barrett, Arthur Lee and Captain Beefheart. 9 original compositions that combine a variety of styles from psych and garage to blues and prog, emitting such freshness while the final result is a cool old-fashioned modern sound! Album takes off with “Please Pleaze Me”. God, I haven’t heard those 2 little words sounding so perfect together since January ’63! The swirled drumming makes a dramatic opening with a scary & electric atmosphere, really psychedelic, imagine Group 1850’s “Mother No-Head” played by Floyd at Pompeii while the Sky was burning! “Lovely Sort Of Death” is a psych-rock anthem taken straight from The Wheels of Cream. “She’s So Blue” is a dreamy wondrous blues rocker with great guitar playing while sounds from flutes make it more relaxing. Slide guitar and organ piano are blending into “Revelation Blues”, a red-hot bluesy number. “Queen Machine” comes next… Just imagine members of Hawkwind and Zeppelin jamming together under the sounds of “Misirlou” and you’ll get the picture! The last 50 secs of the song, there’s a ‘blues” voice explaining the Blues, the Male The Female… Pretty Strange… Next is “Steady Rolling Man”. Hawkwind left the stage, and Zep remained there all alone to present a heavy rocker, a 2:26 real dynamite. Band keeps on speeding with “Into The Pearly Gates” and I’m sure that at the other side of the Pearly Gates, Rory is waiting for them. Too bad that while the guitar comes to fire towards the end, the song is fading out. “The New Dawn” with its trippy San Francisco guitar sound and the progressive molecules could easily stand as a highlight from the “Almost Famous” soundtrack. I can’t think for a better closing of this album than “Witches”. Ideal… Imagine a heavy rock ballad by the Grateful Zeppelin while on vocals is a stoned Curtis Mayfield. What a combination! So, Yes! The Sounds can be so Cruel. But sometimes, Cruel can be so fucking Awesome! A killer album! TimeLord Michalis
Band Info and How to Grab it: