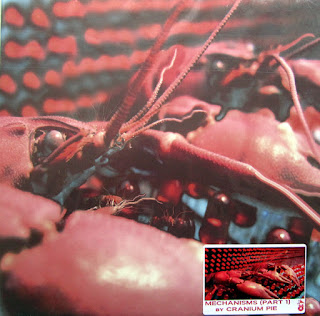 Finally, the long-awaited Cranium Pie’s debut album is a fact! Having increased our appetite with a bunch of delicious cover versions through the Fruits De Mer 7” single series, “Mechanisms” is an album that will fulfil all of our expectations! Speaking as a huge fan of the band, I wanted more and I was lusting for original tunes. So here we are. 7 tunes with original music by Cranium Pie! Rob Appleton, Tim Bray, Steve Meadows and Julian Smith recorded this concept album at the Baking Research Station. This is Part 1, meaning that a 2nd Part will follow. Side 1 takes off with instrumental “This was Now/Awakening of the Birds” a psychedelic ‘bird-song’ with a peaceful almost ambient atmosphere. Next is the recently released as a single “Rememberrr” which brings Floyd (early 70s) and the whole Canterbury scene in the studio. Trippy relaxing out-of-space landscapes are floating in the air. “Zones” is a cosmic number with excellent guitars that psychedelically blends with the ‘Reprise’ version of “Mothership” (full version released as B side of the “Rememberrrr” single). Side 3 (yes, 2 sides, 1 and 3, remember all the great 70s double LPs…) starts with “Drying In The Sun” a mellow spacey effected song with acoustic guitars and a few lyrics towards its end. “Mechanisms” (previously released as a part of TimeMazine Issue #5 CD compilation – under Rob’s kind permission) is the title track – half instrumental half with vocals – that with its spacey Floyd (once more) atmosphere brings to mind the whole album’s concept, involving Robots, Giant Crayfish and Homunculii. Album closes temporally with “Run To Survive”, all 70s Pink Floyd sound in just one track! Hard to wait for part 2… “Stars turn round. I hit the Ground. Spinning light Signal now. Skies are clear and the Time is near. Take a Trip on the Mothership somehow”… TimeLordMichalis

You can find interesting Info about the band here: http://www.craniumpie.co.uk/