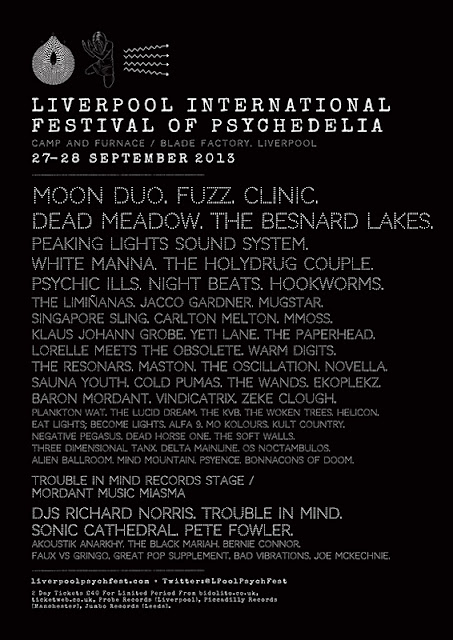 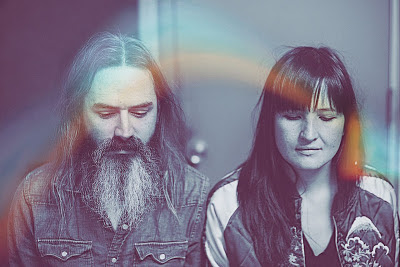 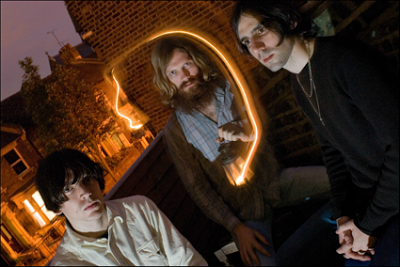 North-Eastern motorik experimentalists WARM DIGITS are set to provide a festival standout, as are THE OSCILLATION (who No Other are also working with on their forthcoming album, due October) and their MOJO-endorsed “vast shiny beast of hypnotic, gig-shaking rhythms and riffs”.

The current darlings of a buoyant UK psych scene, HOOKWORMS, return for a second year, as do Liverpool’s own MUGSTAR, joined by Seattle’s scintillating NIGHT BEATS. Sonic Cathedral maintain a strong Psych Fest presence in the form of with Parisians YETI LANE, and LORELLE MEETS THE OBSOLETE, who will be jetting in from Guadalajara, Mexico.

Organisers are thrilled to announce an exclusive hook-up with the gloriously antagonistic MORDANT MUSIC who bring an audiovisual MORDANT MUSIC miasMa to the festival. This will feature some of the finest artists from the collective’s roster, including BARON MORDANT, EKOPLEKZ, VINDICATRIX and ZEKE CLOUGH.

Brighton’s FAUX DISCX, one of the most engaging and exciting new UK independents, present an exclusive label showcase, featuring SAUNA YOUTH, COLD PUMAS and THE SOFT WALLS, as well as bringing along their eclectic record bag.

This is all in addition to a bill already consisting of -

The festival features a stage curated by the stunningly consistent TROUBLE IN MIND RECORDS, who will be making the trip across the Atlantic from Chicago bringing a cohort of their artists along for the ride.

The full programme of visual arts, projections, film and additional kaleidoscopic delights will be announced later this summer, ahead of the festival in September. The LIVERPOOL PSYCH FEST PSOUNDSYSTEM will also be calling at JODRELL BANK OBSERVATORY on 6th July (with The Australian Pink Floyd, The Time And Space Machine, The Lucid Dream and Hawkwind) as we spin cosmic delights in the shadow of the imposing Lovell Telescope. Audio for extraterrestrials.
Limited tickets priced at £40.00 (pbf) for the two day event are available now at
www.ticketweb.co.uk
www.bidolito.co.uk/

The Liverpool International Festival Of Psychedelia is not an exercise in nostalgia or UFO Club regurgitation, but a celebration of a culture very much at the vanguard of artistic exploration. The 2012 festival was lauded by UK and international media including The Quietus, Shindig!, NME, Stool Pigeon, Mudkiss, Foundwaves, Prog Mag, Artrocker, The Big Issue In The North and BBC 6Music.

Hotel Indigo Liverpool are our official accommodation partner this year, and a selection of http://www.bidolito.co.uk/gig/liverpool-psych-fest-2013-accomodation-bundleearlybird ticket + accommodation bundles are also on sale now
"For their initial foray into bringing rock & roll's more wigged practitioners under one roof, the Liverpool International Festival Of Psychedelia have scored themselves a 150 microgram hit. Curated with care and performed by bands with a rare joy, this is an event devoid of cynicism and one that embraces the Be Here Now mantra with a real sense of love. Here's to the next one." The Quietus


watch a taster video of Liverpool International Festival Of Psychedelia 2012


posted by timelordmichalis στις 4:00 AM