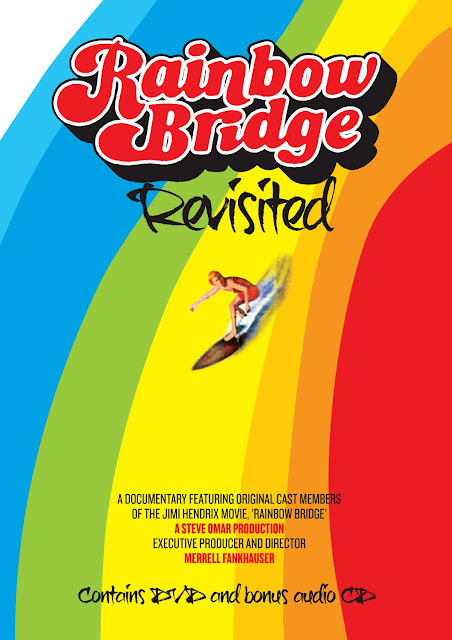 London, UK - 'Rainbow Bridge' was a peculiar 1972 film featuring Jimi Hendrix (who had died two years before) and a cast of local eccentrics using Hendrix’s music and a whole slew of UFO sightings to explore their spirituality. 41 years later, musician and filmmaker Merrell Fankhauser revisits the film to explore its message more fully. The 'Rainbow Bridge Revisited' documentary was really Maui journalist Steve Omar's idea, and Merrell and Steve produced it together. The two had fun looking up and interviewing the original cast of the 1972 Jimi Hendrix movie 'Rainbow Bridge' that was filmed on Maui. It was interesting to hear what they had to say about hanging out with Hendrix making the movie. The one-hour DVD documentary also features some great surfing and music by Merrell Fankhauser, The Space Patrol and Omar and The Wavespies. The package includes a 12-song soundtrack.

Merrell explains, “As you know I lived on Maui for 14 years and I moved there in ‘73 just a year after the Jimi Hendrix 'Rainbow Bridge' film came out. And when I moved there I met a lot of people that were in the movie, and a lot of them were hippies, surfers and cosmic people that were seeing UFOs, and they said Jimi was really into the whole UFO thing, and that there were even some hovering about when they were shooting over there. So we contacted the ones that we still knew were on Maui and we went over and interviewed them and it was really interesting what some of them had to say about hanging out with Hendrix and everything. Then we went down to Southern California, because some of them lived down there, and we interviewed a few of those, so we’ve got some really interesting interviews with an insight into some of the things that were going on with that movie with Hendrix that didn’t come out. In the original 'Rainbow Bridge', it follows Pat Hartley the actress from the Sunset Strip over to O’ahu and then to Maui where she meets all these characters, and ultimately Jimi. And the message, because of all of her travels and the way it was put together, kind of got lost a little bit in the different scenes and things. I talked to one of the guys from Warner Brothers who was in on the editing and he said that when they brought the film over it was in all of these bags and there was sand in it and they were almost afraid to put it on their machine, and had to clean it all and they kept going through this stuff and it was just a lot of hippies talking about cosmic stuff and getting high on drugs, and everybody kept saying 'Where’s Jimi, where’s Jimi? Where’s the concert' You know they were afraid they weren’t going to have enough to make the movie really good, but finally they got to the 'Concert' footage. So what we did, we kind of condensed these interviews down and we segue into some really great surfing on big waves over there, because a lot of the people that were interviewed were surfers and we have old footage of them surfing, and then we cut to surfing footage from now. I have about ten of my newer instrumental surf songs in there with the surfing, and then it goes to a couple of band performances – there were two Maui bands featured on the soundtrack: Omar and The Wavespies and The Space Patrol – the lead singer, Les Potts,  was in the original 'Rainbow Bridge' movie.” 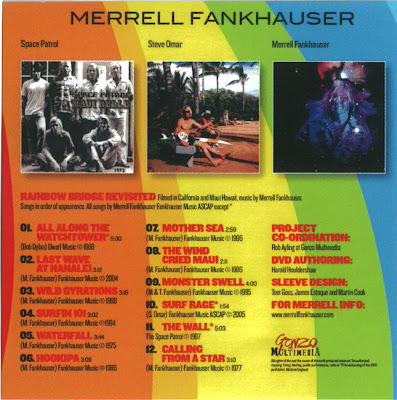 Merrell Fankhauser is considered one of the main innovators of surf music and psychedelic folk rock, and is widely known as the leader of the instrumental surf group The Impacts who had the international hit “Wipeout”. His travels from Hollywood to his 15 year jungle experience on the island of Maui have been documented in numerous music books and magazines in the US and Europe. Merrell has gained legendary international status throughout the field of rock music; his credits include over 300 songs published and released. Merrell Fankhauser has presented a number of television programs over the years including 'California Music', 'Route 66 TV Live', and in 2001 he began hosting a music show called 'Tiki Lounge' that airs on the California Central Coast, Southern California, Hawaii and parts of the East Coast.
To purchase Merrell Fankhauser 'Rainbow Bridge Revisited' CD/DVD set:
http://www.gonzomultimedia.co.uk/product_details/15544/MERRELL_FANKHAUSER-Rainbow_Bridge_Revisited.html


posted by timelordmichalis στις 1:40 AM