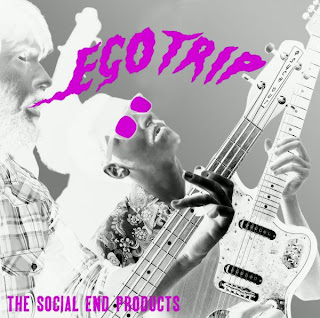 Having heard this stuff from this year’s early summer, this is quite a relief! Not for me. But for ALL of you out there. Because you have the chance to obtain one tasteful single with 4 ‘dynamites’ from one of the best new-comers in the worldwide psychedelic garage scene that I was afraid it wouldn’t be released! The band, formed back in 2009 in Athens is new, but their 4 members (Sta on lead vocals & drums, Man on guitar, Themos on bass and Dimitris on guitar) are quite experienced by being members in hot Greek garage bands such as The Walking Screams, The Outtasites, The Meanie Geanies, The Inner Mystiques, Les Chrites. Of course they took their name after the self-titled garage anthem of New Zealand’s The Blue Stars (’65-’66). It’s released by Radar Eye Records and distributed by Fuzz Overdose (www.fuzzoverdose.com) Single starts with the lysergically rhythmic “Kaleidoscopic Path”, with a killer bass line taken straight from A Saucerful of Secrets and a burnin’ fuzzy west-coast guitar. Kaleidoscopic indeed! “Psych Out” is in the same garage psychy vein, a real catchy tune reminding one of the ’66 golden era of all those garagers from the US (from The Sonics to the Shadows of Knight & the Elavators) while “Good Samaritan Gone Bad” is a mid-tempo garage punky with inspired lyrics. Last one is “Feel Like A Snake”, a fuzzy driven hot rattlesnake garage shaker! This is one of the best 2011’s 45rpm releases. But the negative fact here is that 2 incredible garage-rockers (“I Wanna Disappear” and “She’s Off Drugs She’s So Boring”) are left outside because of the limitation that a 7” single offers. It should be a 10”EP!!! But I’m pretty sure that the band is not going to leave me hungry and greedy… I want more…asap!!! TimeLord Michalis

get it from here: http://www.fuzzoverdose.com/label/

posted by timelordmichalis στις 11:01 AM